Messages from the Mines

Messages from the Mines is an interactive art installation that excavates and archives custom messages embedded in the Bitcoin blockchain. The distributed Bitcoin ledger contains hidden love messages, cryptic poems, ASCII art, signatures, eulogies and more. These messages are a creative misuse of the Bitcoin transaction protocol, a form of digital graffiti, unique—though overlooked—cultural artifacts forever embedded in one of the most contemporary digital technologies.

Florida design agency Branger_Briz released an interactive art project called Messages from the Mines that explores the Bitcoin blockchain and reveals the artworks and messages hidden among the code.

Our project looks at the Bitcoin blockchain not from the traditional perspective of investors, traders, or programmers, but rather from a cultural perspective. We've built a system for extracting, archiving, researching, interpreting and annotating the messages left behind and document the evolution of this creative re-purposing of the blockchain. We approached this task not only as artists but also as anthropologists conducting contemporary media archeology; we seek an anthropological understanding of this phenomenon. Who are leaving these messages? What are their motivations and sentiments? What forms of anonymous communication occur on the ledger?

The eMerge Americas 2018 conference commissioned Branger_Briz to make an engaging interactive experience on the theme of blockchain technologies. For two days in April, we operated a live Bitcoin node at the conference hall. This machine acted as a peer on the Bitcoin network, relaying transactions to a global network of peer computers all over the world. This allowed us to maintained a full copy of the Bitcoin ledger for conference attendees to explore hidden messages and real-time Bitcoin transactions. 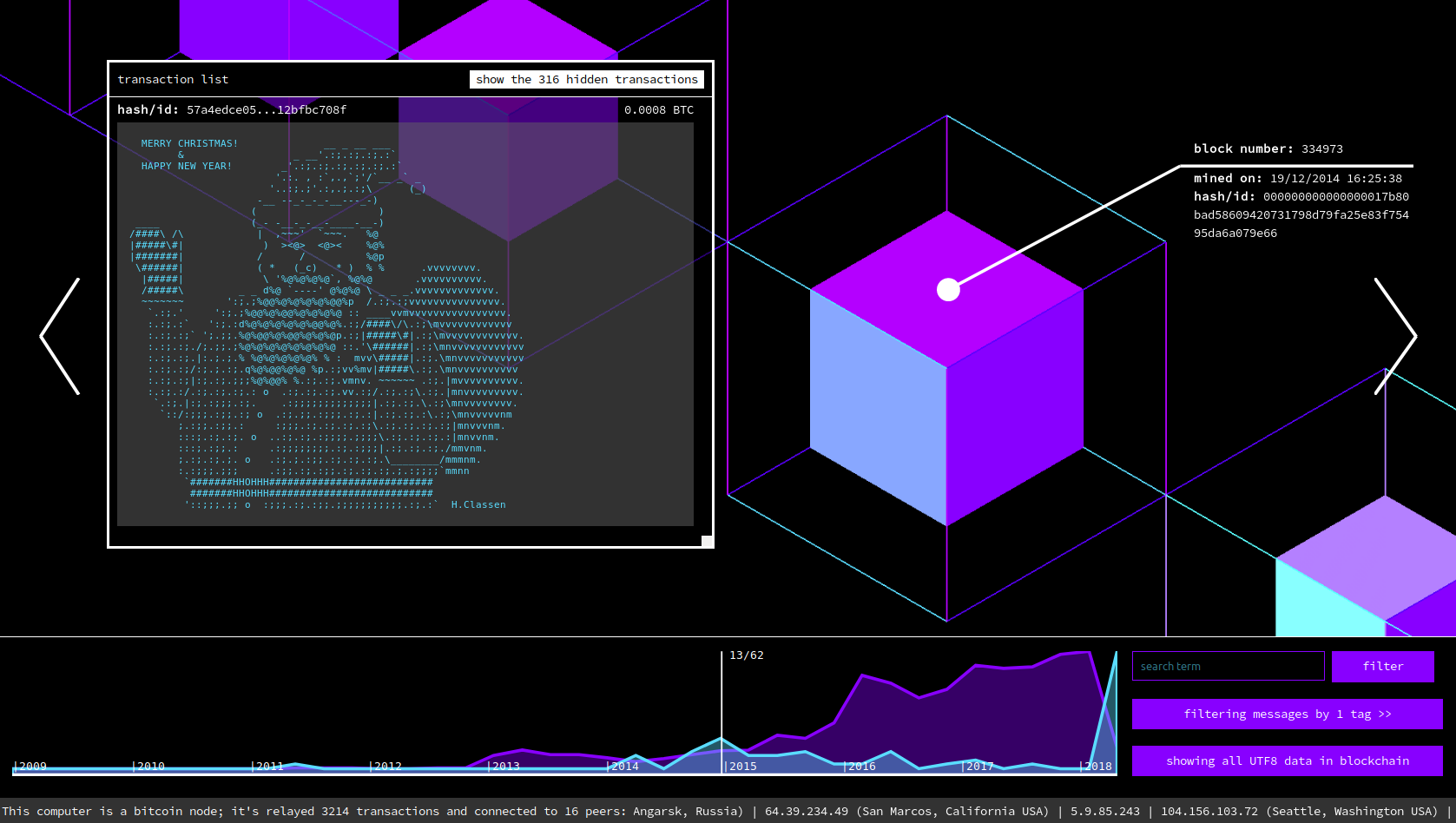 We wrote custom software that parses the entire history of Bitcoin transactions extracting any text-based messages engraved in their contents. We identified ~11,000 of the 520,000+ blocks at the time that contained some sort of intentionally embedded text data. From there, we created a tool to review these messages, tagging and categorizing them into common themes and recurring message types we identified. We searched the net to try and better understand some of the most cryptic or interesting messages, adding annotations, notes, and comments to the messages as we researched. We've amassed a large dataset including messages written in over 50 different languages. 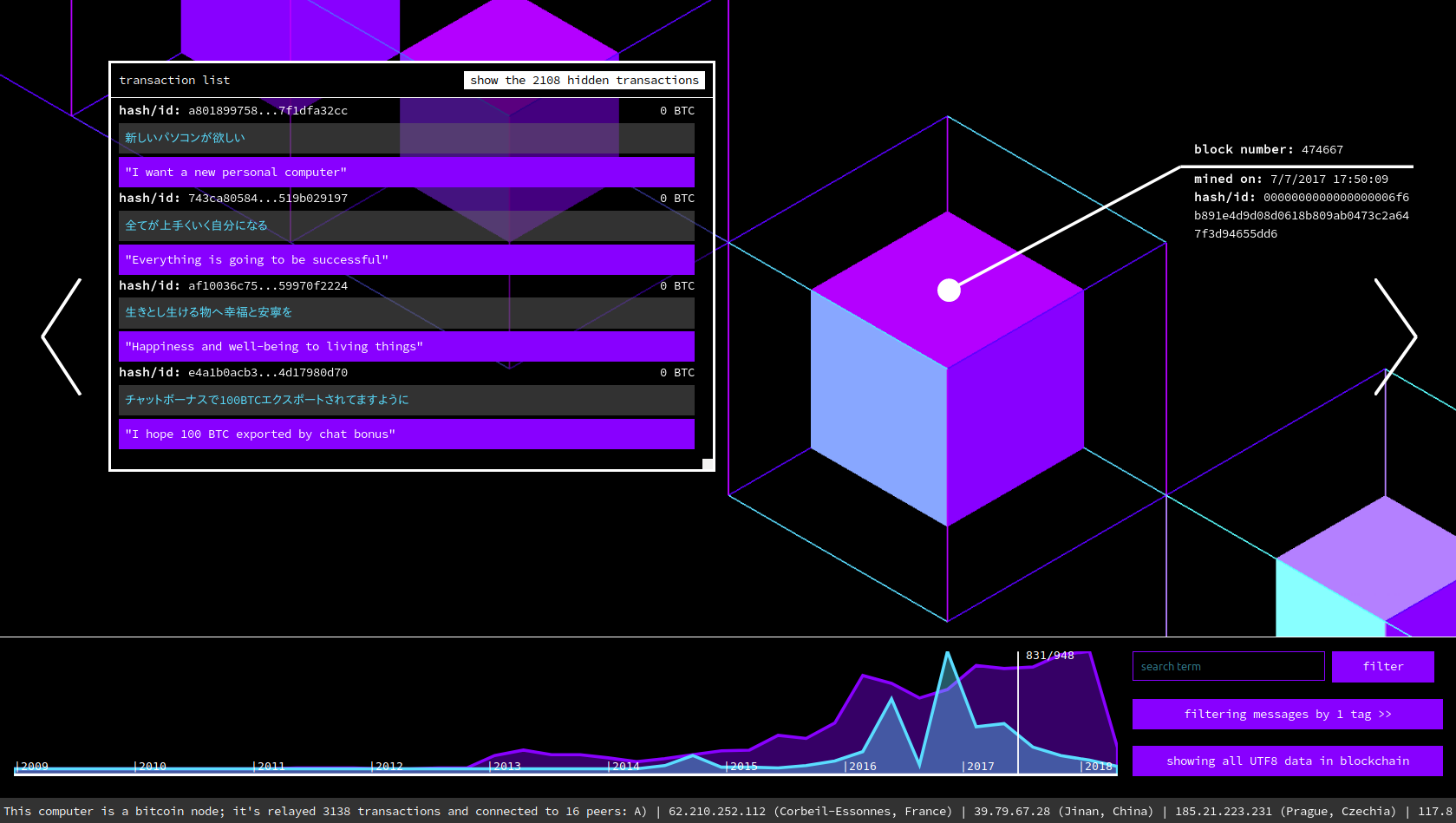 Our dataset and software are both open source and we hope that researchers, cultural anthropologists, and curious netizens will find our work useful. We hope to launch a publicly web version of the archive online soon. Until then, if you are interested in accessing the data for research please get in touch: us@brangerbriz.com

We'd like to offer special thanks to Ken Shirriff for his 2014 blog post that inspired us to create it, Antoine Le Calvez who authored the open source python blockchain parser we used (and contributed to!), and the entire Bitcoin development community who built the Bitcoin software we so heavily relied on.